In Bangalore right now to conduct the Bengaluru Brain Games’ Sudoku and Puzzle events in about 2 hours time. Quickly making this post before leaving.

For 462 (Serbian Snacks, Round 7) – Enter a digit from 1 to 6 (1 to 5 in the example) into each cell so that each row and column contains each number exactly once. Each digit in the grid represents the height of a building and the clues on the outside of the grid indicate how many buildings can be “seen” when looking from that direction. Taller buildings block smaller ones from being seen. In addition, digits in cells in the outer grid with a circle provide similar Skyscrapers clues for the inner grid for a horizontal or vertical (but not diagonal) direction. All such cells are marked with a circle.

For 463 (Dutch Delight, Round 4) – Paint some cells in the grid so that for each region either all its cells are painted or none at all. Numbers outside the grid indicate the number of painted cells in that row/column. 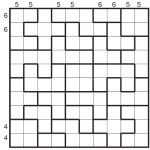